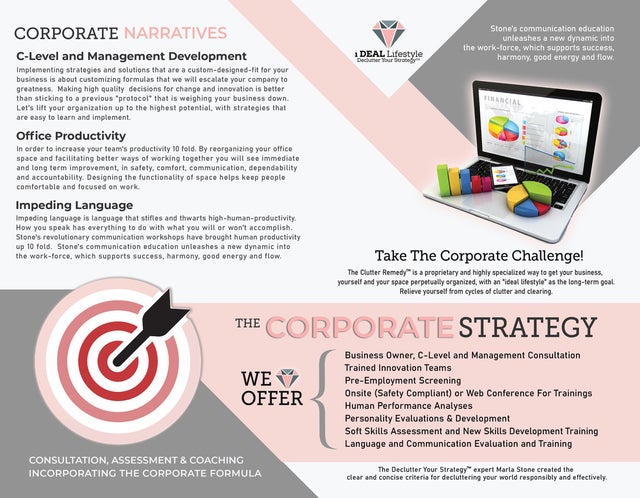 Corporate or Private Workshops (Per Hour) Including materials

Lifestyle and Business Coaching with Marla Stone (Per Hour)

Lifestyle Coaching is an essential part of staying organized. I help you get organized to the bone, but keeping it organized takes some education and coaching. You will learn all my techniques and how I organize homes and businesses. I will teach you how to become independently organized, long-term. Sometimes there are emotional blocks to getting and staying organized and I have exercises that will help move those blocks.

Marla motivates, and hold you accountable to learn and capture new business practices including:

Decision making techniques which help you and your staff make clear and concise decisions that will enhance your personal and business life.

Leadership skills and time management techniques that are easy and work to increase productivity three-fold.

Learn how to communicate in a new and innovative way and to utilize time management strategies that will get you to do what your supposed to in a timely manner.

Get the results that you want to perform at your best, to increase sales, efficiency and productivity.

We help individuals in-person, telephone calls and or Skype sessions.

We do training and development for large or small businesses/ corporate training. We will shadow processes, sit in on meetings or conferences and give daily, weekly and or monthly feedback.

Learn more about yourself, negative patterns and how to maintain order and organization in your life.

Learn how to have personal growth and Increased Insight. You may have heard the old adage, “Two heads are better than one.” A Lifestyle Coach is ready to assist you with your thoughts, words and actions so your life will improve, and you will feel more confident and collected. With a commitment to the coaching processes you may achieve more satisfaction with life in general. Lifestyle Coaching is confidential and may help you with disorganized thoughts and behavior and much more.

$150.00
Feng Shui Means Wind and Water, but to a home and or business it means balance, flow and good energy.  A Feng Shui and Decor Specialist will come to your home and discuss colors, your décor, furniture placement, go over your bagua areas, make suggestions and even hands on Feng Shui your space.  The Specialist can even go shopping with you to bring better Feng Shui to your space.
Shop

Decor and Furniture finding and placement are key to staying organized. Finding extra pieces of furniture and figuring out space planning so that you will find a home for all that you own is simply magic!

We get your entire office categorized and organized. Creative filing systems, space re-organized, storage solutions, and coaching for yourself and staff. An organized office space and organized employees are the cornerstones of a successful and prosperous business. We plan space based on Covid safety practices.

$125.00
The Initial assessment is to get acquainted, gather history, and is educational.  Marla will educate you on how and why people get and remain organized.  There will be a walk-through of your entire space, and you will be given all the ideas and information of how the organizing process works. Suggestions for storage and extra space for your belongings will also be discussed. The assessment to get organized usually takes 1-3 hours, depending on the scope of the project. This is the time where you and your lead organizer will make a plan of exactly how the organizing will happen. During the assessment you will learn how your situation has occurred and how you will be able to remain organized long-term. This is the most important part of the organization process. Having a plan and an understanding of the underlying challenges leads to long term organization. Assessments are $125.00 per hour and $120.00 per hour for seniors, or people with challenges, military and people who provide medical, nursing or social services to others.
Shop

Garage Organizing - (Per Hour Per Organizer)

Garage Organizing with the I-Deal-Lifestyle Methods gets your garage organized for good. Our I-Deal-Lifestyle methods gets everything that belongs in the garage there, categorized and easy to access. Garages are meant to be for cars, and items that do not belong in the house. We get the garage uber organized, and a place that will bring you peace and joy.

Using the I-Deal-Lifestyle methods we create a home environment that will be organized for good. We create a system that allows easy access to the things in your home that you use the most versus what you use the least. Our method of categorizing everything in your home and the fine tuning of the broad categories has revolutionized the way organizing is down. The services also include moving furniture, finding furniture for more storage options, building racks & usefu storagel products, personal shopping, junk removal, clearing and cleaning and much more. Seniors, military, teachers, therapists / social workers, and nurses are charged $70.00 per hour per person